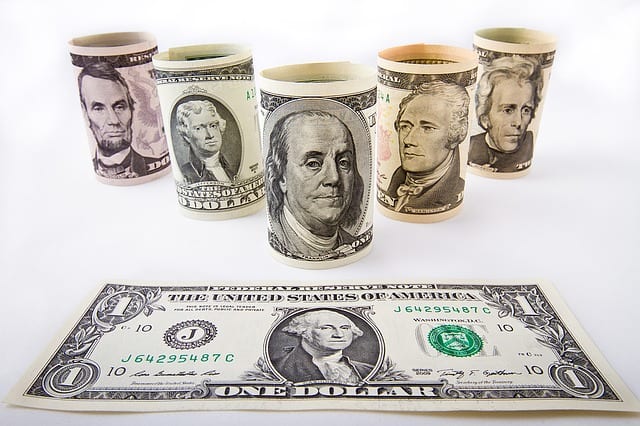 Recently, Equifax reached a settlement agreement with the Federal Trade Commission to provide compensation for those impacted by the data breach. The FTC has posted summary details at its website. And if you’re a real masochist, you can read the entire text of the settlement via PDF.

Over the past week, there have been a lot of stories going around that everyone is entitled to $125 due to the Equifax settlement. Here, for instance, is one of my real-life Facebook friends excited at the possibility of free money. 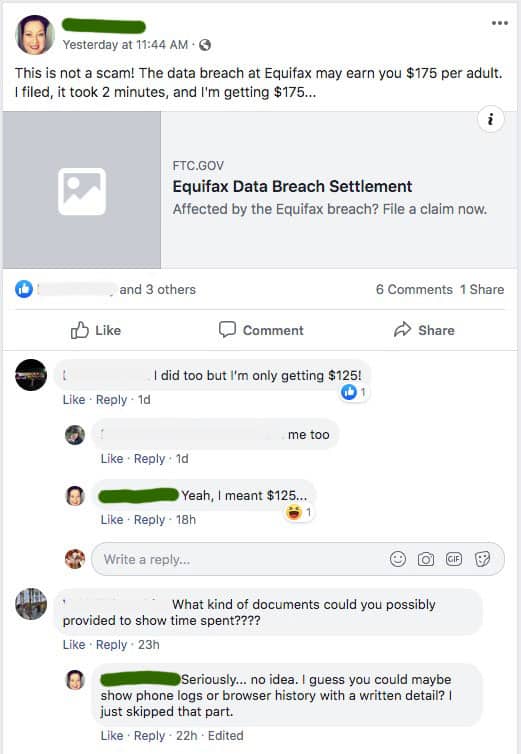 On Friday, one U.S. Representative tweeted: “Everyone: go get your check from Equifax! $125 is a nice chunk of change. Get that money and pay off a bill, sock it away, take a day off, treat yourself, whatever you’d like.” And at Slate, one author wrote that you have a moral obligation to claim money in the settlement.

But being a skeptic by nature, I’ve been digging a little deeper. Turns out things with the Equifax settlement are a little more complicated than “everyone gets $125”. In fact, most people won’t (or shouldn’t) get any money.

What the Equifax Settlement Provides

The Equifax settlement contains a number of provisions based on how badly an individual was affected by the data breach.

If your identity was actually stolen, for instance, and you suffered real financial losses because of it, then you’re entitled to a cash payment of up to $20,000. If you had to spend time dealing with the data breach, you’re entitled to $25 per hour (up to 20 hours). The catch? You can’t just say you suffered losses. You have to provide proof. (If you spent less than 10 hours dealing with the issue, no real proof is required.)

If your identity was not stolen as a result of the Equifax data breach, then there are one of two possible outcomes.

It’s this latter provision that everybody is writing about. “Get your free $125!” the headlines shout. But it’s not as simple as that.

For one, this money is only meant for folks who already pay for credit monitoring services. Yes, I know. Plenty of people — probably millions — will lie about this in order to get a claim at that cash. But that doesn’t make it right.

But there’s another, more important point. 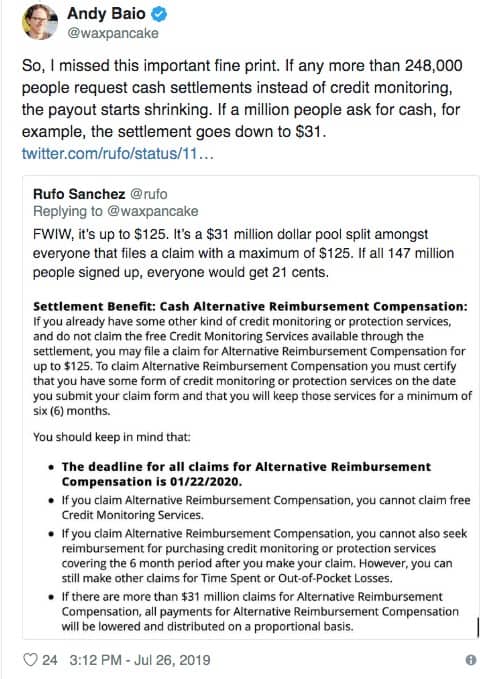 Don’t believe me? You can find this info on page 36 of the court order or item 10 of the official settlement FAQ (“What if I already have credit monitoring or identity protection services?”). My guess is that in the end, folks who opt for payment in the Equifax settlement will get very little money. And that’s largely because people who weren’t actually affected will have filed in the hopes of getting free money.

Here’s another thing you should know. For most people, opting to take the $125 is a dumb choice — even if they’re actually eligible for the cash and not lying about it.

Ten years of free credit monitoring is worth far more than $125!

These services typically cost about $25 per month. Taking the ten years of free credit monitoring is worth about $3000. Last I checked, $3000 is far more than $125.

[Update: As commenters have noted, credit monitoring might cost this much but it’s not necessarily worth this much. Fair enough. I stand by the main point though. $125 amortized over ten years is about $1 per month. Credit monitoring is worth at least $1 month, right?]

How to Get What You’re Owed

After all that, how can you get what you’re owed? U.S. government websites are always awesome and useful, and this time is no different. The official FTC Equifax data breach settlement page has all the info you need.

That page will route you to the Equifax data breach settlement website where you can check your eligibility (i.e., whether or not your data was compromised) and file a claim. It took me all of two minutes to complete the forms and request my ten years of credit monitoring. Once the case settles (probably sometime in late January), I’ll get info on how to access the service!

Kim, on the other hand, may actually be entitled to a real, cash settlement. She had issues with identity theft right around the time of the data breach. I don’t know how we prove that these problems were due to the data breach, but if she’s kept her records, she could indeed receive cash as part of the Equifax settlement.