My new course on financial independence and early retirement! 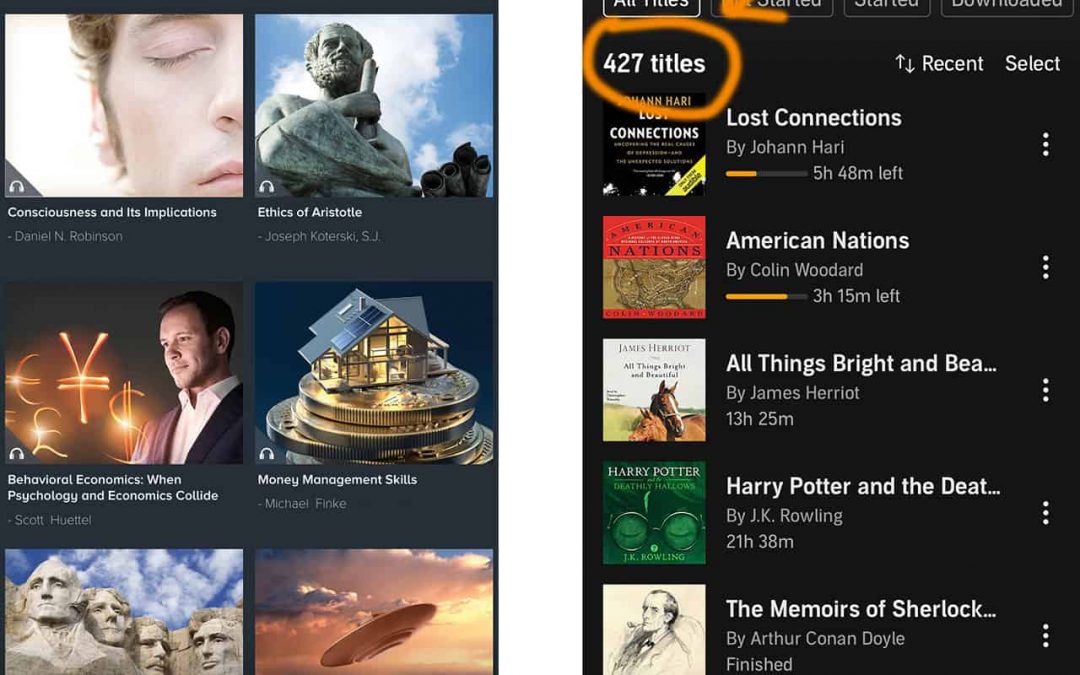 Nearly two years ago, I received an unusual email at an address I rarely check anymore. The author wrote:

I am writing to you today because The Great Courses in partnership with Audible is exploring the possibility of creating a high-quality series on Financial Independence. We believe that you may be an excellent candidate to teach such a series. I’ve read many articles at Get Rich Slowly and I’m always impressed by your writing and how much excellent content you create.

At first, I thought this was spam. Before I deleted the message, though, I checked the sender. Sure enough. The sender (and the message) was legit.

Thank you for reaching out. I get a lot of requests for my time and typically turn them down. Not this one. I feel like this is a terrific idea and well-worth exploring. I am a long-time fan of both Audible and the Great Courses. I’m not joking.

I included screen captures to prove that I owned 72 Great Courses and nearly 372 audiobooks from Audible. Those numbers have since grown, naturally.

Discussions ensued, a contract was created, and in December 2019, I began the work of creating a five-hour, ten-part course on financial independence and early retirement. I finished that course last April. I recorded it in May. And last month, at long last, How to Achieve Financial Independence and Retire Early made its way into the world!

You folks all know that I am on a personal finance journey. You all know that I’m constantly learning about money and that my understanding and opinions tend to change with time. With this sort of project, though, I have to present myself as an expert. The info I provide has to be self-contained in one neat little package.

In this case, I had some very specific parameters.

The course had to be roughly 40,000 words in length, and the whole had to be divided into ten smaller “chapters”. Why 40,000 words? Because 40,000 words are roughly five hours when read aloud. Essentially, my task was to encapsulate the most important facets of financial independence in ten half-hours (4000-word) lectures. So, that’s what I did.

I also had to decide who the course was for. Was this meant for folks who already knew about FIRE (financial independence and early retirement)? I’m not the best person to offer deep, technical advice (as you well know), so I decided against that. I decided to target folks who were FI-curious: those who have heard about the concepts but needed a crash course in what FIRE entails.

In the end, I adopted the following outline:

As I said, I did my best to cover the core concepts of the FIRE movement. I made a deliberate decision to keep the course as non-technical as possible, which probably comes as no surprise. And, when possible, I explored the psychological and philosophical implications of wealth.

Because of the limitations of this project, I couldn’t cover certain pet topics of the FIRE community: travel hacking (which actually has zero to do with FIRE anyhow), health care (which is important!), backdoor Roths, etcetera. Nor could I dive deep into any given topic. There just wasn’t space.

In the end, though, I’m proud of the course I created. To my mind — and I know I’m biased — this project is the best introduction to financial independence and early retirement available. I’m not joking.

If you want to share this concept with friends or family, I believe this course is a great way to do it.

An Intro to FIRE

The most difficult part of creating this course was recording it. Early last May — while uncertainty about COVID still raged — I spent two days at a local recording studio, reading my words aloud. It was tough!

I’m a talkative fellow, but I’ve never had to actually read for hours on end. It’s more difficult than you might expect. By the end of the second day, I felt like my mouth was full of marbles. Plus, I worried and worried and worried that my delivery was terrible. (And, in the months since I recorded the course, I’ve had second thoughts about two sentences that I regret including haha.)

So, my biggest fear was that people would hate my “performance” of the stuff I’d written. Much to my surprise, that hasn’t been the case. In fact, my performance is the highest-rated part of the course. Whuh?!?

Ready for some math nerdery? Good, because you’re going to get it.

What amuses me, though, is that the breakdown of these ratings is nearly identical. Take a look:

Anyhow, my Audible course is out! I’m proud of it. I think it’s an excellent intro to the core concepts of the financial independence and early retirement movement. I hope it proves useful for many people.

As proud as I am of this course, and as much as I hope it helps people, I’d be remiss if I didn’t point out that I first explored these basic ideas in The Money Boss Manifesto, which remains available as a free PDF. The Audible course is much more comprehensive and features my latest thoughts on each subject, of course, but that free PDF is a good resource for folks who can’t (or don’t want to) buy the course.

You can find out more about which cookies we are using or switch them off in settings.

This website uses cookies so that we can provide you with the best user experience possible. Cookie information is stored in your browser and performs functions such as recognising you when you return to our website and helping our team to understand which sections of the website you find most interesting and useful.

Strictly Necessary Cookie should be enabled at all times so that we can save your preferences for cookie settings.

If you disable this cookie, we will not be able to save your preferences. This means that every time you visit this website you will need to enable or disable cookies again.

This website uses Google Analytics to collect anonymous information such as the number of visitors to the site, and the most popular pages.

Please enable Strictly Necessary Cookies first so that we can save your preferences!